“Free and Fair Elections: Towards Genuine Citizens‘ Participation and Representation”, implemented with the support of ifa and the German Federal Foreign Office

The project aims to contribute to re-building democracy in Lebanon through advocating free and fair
Parliamentary Elections in 2022. It is multilevel consisting of:

The policy paper can be found under the Media section on the website. The digital media campaign will
be launched on September 15, 2021 and the content will be shared on Masar’s social media platforms.

The digital media campaign was launched online on September 15, 2021 with attendants from political parties, representatives of central actors, NGOs, activists, diplomats, and media.  The key message of the campaign called on the central actors to immediately endorse all reforms pertaining to the electoral law. The campaign consisted of visuals, videos, infographic videos and engaging stories, polls, and social media posts. It ran on Masar’s social media platforms and on google ads during September 15 – November 30, 2022, reaping high views and reach. Content can be found on Masar’s social media platforms. 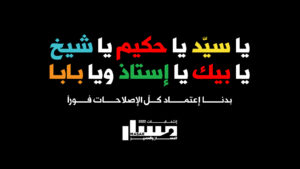